skip to main | skip to sidebar

Monday Musings with a Drunken Monkey 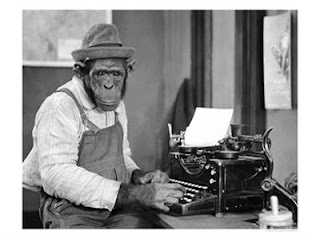 It has been said that if you gave a room full of monkeys a bunch of typewriters, they would eventually write the whole works of Shakespeare. I gave a monkey a bottle of tequila and my blackberry this weekend. Let’s see how he did.

I wonder how much of a difference Purell would have made in the life of Lady MacBeth ? She seems like a natural spokesperson.

Hey Madison Avenue, I want my 10% when you steal my idea.

Saw a Goth Girl driving a black car with a bumper sticker that said "Yes Wiccan". I think she put a spell on me when I passed her because I hit 3 straight red lights after that.

Got the dirt turned & the topsoil/mulch combo spread in the swampgarden just before the heavy rains came last night. I am taking a less is more approach to my garden this year. Raspberry & blackberry bushes both show early growth, green & buds. I need to add at least one more of each along with more strawberries. The trees I took out last fall should help with the afternoon sun in this section.

I don’t think a Kahuna sized cup of coffee could have helped me this morning.

“Up In Smoke” came on the other morning while I was jogging on the Dreadmill of Doom and all I could think was like “whoa….”.

I hope the Amazon Birthday Fairy remembers to get me that one for my birthday.

The Boston Marathon must be coming up because I have seen the Little Jog Mom out running every morning since we got back from . I am still writing my post about just in case you were interested.

Loved the Richard Alpert episode of LOST. There is a Desmond-centric/slideways episode coming up in 2 weeks.

God invented voicemail for a reason and some people just can’t seem to grasp that concept.

Boondoggle Week seemed like a good idea when it was first planned. Now it just seems like a waste of time. I better grab a good book or two for all of my flights every which way.

James Lee Burke sure made Hackberry Holland a very difficult character to give a rat’s ass about in the first half of “Lay Down My Sword & Shield”. I had to keep reminding myself that this book was written in 1970 and not today. The character did grow on me as he started down the Dave Robicheaux path of redemption. The sequel, “Rain Gods”, just became more interesting to me now that I can see how the character has grown in the almost 40 years since his debut.

Butler, West Virginia, Michigan State & Duke – it does sound more like a pre-season holiday tournament than a Final Four but games leading up to this point have been outstanding to watch.

My New York Rangers however, have been less than outstanding to watch and it pains me to know that they have my playoff money hostage when they clearly are not going to make the playoffs.

And that is the view for now from Behind The Shades on this rainy Monday….swampy abides…

wooooooooooow. dude, you need just as much help as i do.

You should read them too